Duvet vs. Comforter: What’s the Difference?

Searching for bedding can be confusing. You might be trying to figure out the difference between a duvet and a comforter.

A duvet is a bedding option consisting of a flat bag filled with natural or synthetic fibers nested within a removable top cover. Today's duvets are made with a variety of fill types.

A comforter is a quilted blanket filled with soft, synthetic fibers. Still not sure which is for you? We cover everything you need to know about duvet vs comforters.

Main Difference Between a Comforter and a Duvet

The main difference between a duvet and comforter is a duvet is a two-in-one design consisting of an insert and cover, a comforter is a single piece of bedding. That means that a duvet always requires a cover that essentially works like an oversized pillow case.

The other big difference is that a duvet's insert is its "fill." This is why it has a looser, fluffier feel. A comforter has tighter quilting with evenly distributing filling worked in. Duvets typically have higher fill power that makes them much fluffier and "cozier" than comforters even though they're designed to be more compact.

Comforter: The Pros and Cons

Let's talk about what to consider when you seek comfort in a comforter over a duvet.

Duvet: The Pros and Cons

Next, dive into the pros and cons of diving under a duvet instead of a comforter every night.

While duvets appear fuller on your bed, they actually tend to be slightly smaller than comforters. Comforters are designed to hang over the sides of your bed just a little. A duvet will give you more of a "flush" fit. Both duvets and comforters come available in every mattress size.

Use below to better understand duvet and comforter standard sizes:

Just keep in mind that sizes for duvets and comforters can vary slightly based on manufacturers. Many manufacturers size up or down from the norm by a few inches. It also helps to know your mattress size when picking bedding. Do you have a thicker, larger mattress? Steer toward a larger duvet or comforter to get nice coverage around the edges.

Duvet vs. Comforter: Which Is Better?

The decision on which to buy is up to you and your preference. A comforter can be more difficult to clean, but provide added design options. A duvet is easy to clean and more fluffy.

Comforter is ideal if:

Duvet is ideal if:

The Purple Duvet is the perfect down-alternative duvet that gives you all the cozy, warm benefits without the allergens, or pokey feathers of a down duvet.

When it comes to duvet vs comforter care, the duvet takes top place for ease. That's because your cover slips off to go in the machine. By contrast, getting a bulky comforter into a washing machine can be a Herculean task.

Washing a comforter means a trip to the dry cleaners for most people. Don't forget the perk of being able to swap a stained or destroyed duvet cover for a new one without getting rid of the whole thing.

What if you were just choosing between duvet cover vs comforter based on looks alone? Comforters add that "layered" look that hangs over the sides of your bed.

However, not everyone loves a "frilly" bed. A duvet helps you pull off a cleaner aesthetic. It's the more modern choice. A duvet moves the emphasis from the sides of the bed to the top of the bed by offering extra fluffiness.

What Is a Duvet Cover?

A duvet cover is the two-part covering that includes an insert and cover. This design allows you to swap out your cover and insert for things like stains, wear and tear or changes in your personal taste.

What Is a Comforter?

Offering the comfort and clean aesthetic of a classic duvet, the Purple Duvet is down-alternative bedding that feels soft and cozy without the allergens or pokey feathers of old-school duvets. 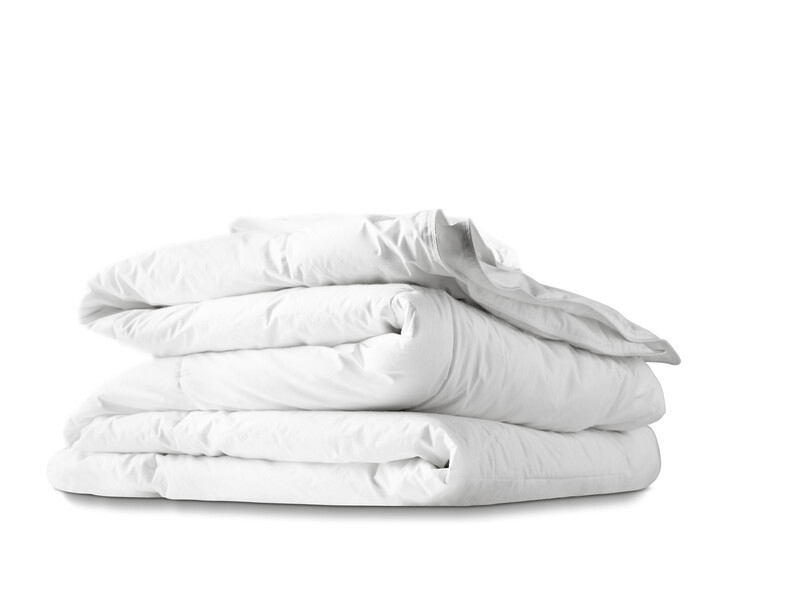