What Is A Weighted Blanket? How It Works And Its Benefits

Roughly 70 million Americans suffer from some kind of chronic sleep problem. More than just a nuisance, lack of quality sleep is believed to be associated with decreased productivity, anxiety and panic disorders, obesity, and a whole host of health problems.

And while melatonin, yoga, essential oils, and meditation have all been touted as effective remedies for insomnia, in recent years, more and more people are finding comfort and a calmer night's sleep with a weighted blanket.

What Is A Weighted Blanket?

Also called a gravity blanket, a weighted blanket is a heavy blanket that is used to provide gentle pressure on the body. This is believed to produce a variety of therapeutic benefits for users, including improved sleep and an overall sense of security.

If you're not a fan of plastic or cotton stuffing (which can make blankets too bulky and warm), Purple offers an alternative with the Bearaby Weighted Blanket. The 20-pound blanket is made completely of hand-knit, organic, and breathable cotton yarn that encourages natural airflow. That way, it won’t cause sweaty sleep, even on warm nights. 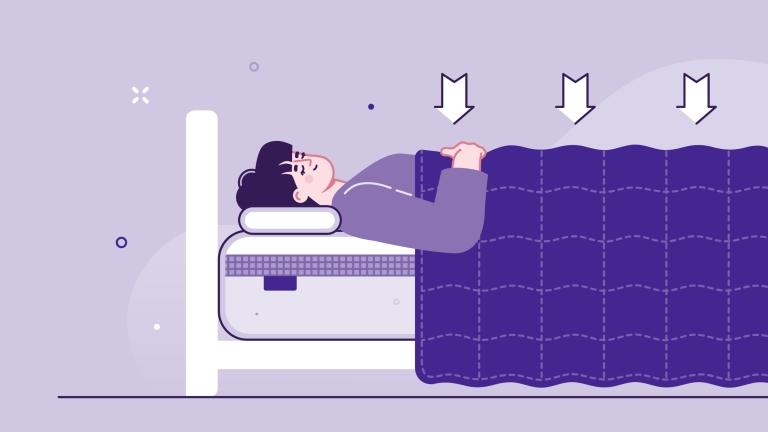 Weighted blankets make use of the scientific principles of deep touch pressure and deep pressure touch stimulation. By gently applying pressure to the body, a weighted blanket is believed to encourage the release of "feel good" chemicals in the brain, such as serotonin and dopamine.

Basically, lying under a heavy blanket has the same effect as being hugged and held. It boosts your serotonin levels and, in turn, helps you regulate your stress and anxiety and provides you with a sense of calm.

Most companies recommend getting a weighted blanket that weighs approximately 10 percent of your body weight. So, for instance, if you weigh 200 pounds, you should buy a 20-pound blanket.

The Pros And Cons Of Weighted Blankets

Weighted blankets can bring about a whole host of benefits for various types of sleepers, but that's not to say that it works for everyone. Get a closer look at the pros and cons of using weighted blankets below.

As mentioned, weighted blankets are believed to have the capacity to boost the brain’s production of feel-good chemicals like serotonin and dopamine. These chemicals keep your stress levels low and allow you to have deeper, more restorative sleep.

Additionally, research has shown that deep pressure therapy can lead to the decrease of the stress hormone cortisol. With lower cortisol levels and higher serotonin and dopamine, your brain becomes more relaxed, less stressed, and more capable of achieving higher quality sleep.

About 40 million people in America live with some form of anxiety – some severe enough to wake them up in the middle of the night with anxiety attacks. And that's if you're lucky enough to be able to fall asleep. For many people diagnosed with an anxiety disorder, chronic insomnia is just one of the many symptoms they have to endure.

But research has shown that using a weighted blanket can help alleviate anxiety-induced insomnia and reduce incidences of sleepless nights. In turn, your overall quality of sleep improves and you feel more rested and calmer in the day.

Willis-Ekbom Disease, or restless leg syndrome, causes feelings of tingling, creeping, and “pins and needles” on sufferers’ legs, particularly at night. This brings about the urge to keep moving one’s leg, making it difficult to fall asleep. As such, most people with restless leg syndrome also battle insomnia and sleep deprivation.

Compression socks are believed to help alleviate the symptoms of restless leg syndrome. However, they can often cause problems like chafing and irritation. Weighted blankets serve as a good alternative to people with Wilkis-Ebom, without the risk of skin issues.

Alleviates Pain In Those With Fibromyalgia

Fibromyalgia is a chronic condition that causes widespread and long-lasting pain and tenderness throughout the whole body. Also known as the “silent disease”, fibromyalgia is one of the most difficult conditions to diagnose and is often misunderstood – even by professionals.

As such, there is still no cure for this condition. Prescription drugs and certain forms of therapy, including deep pressure therapy, are believed to help alleviate some of the physical and psychological symptoms associated with fibromyalgia.

The Drawbacks Of Weighted Blankets

Difficult To Travel With

Weighted blankets are heavier, bulkier, and generally harder to lug around than a regular blanket. While they won't take up too much room when you're traveling by car, they can eat up precious baggage allowance if you're flying.

Most cleaning experts will tell you that any blanket over 20 pounds should be sent to a laundromat or washed in a commercial washing machine. This is to avoid putting too much strain on your home machine. If your blanket is in the 15 to 20-pound range, you can use your own machine – just make sure you use the gentle cycle and a mild detergent.

Not Suitable For Warm Climates

If you live in a place that gets too hot to sleep, your weighted blanket may spend more time in the closet than the actual bed.

Not Suitable For Children

If you co-sleep with your kids, you may want to avoid using weighted blankets – these can put small kids at risk of suffocation and circulatory diseases.

A little kid having trouble breathing may struggle to push a 15-pound weighted blanket, let alone a 30-pound blanket, out of the way. Too much weight can also cut a child's blood circulation and cause irregularities in their blood pressure.

Who Can Benefit From Using A Weighted Blanket?

While weighted blankets aren't for everyone, they can be life-changing for a lot of people, including:

Restlessness, inability to focus, lack of impulse control – these are all symptoms of attention deficit hyperactive disorder or ADHD. Sensory intervention, like strenuous exercise or the deep pressure of a weighted object, is said to help alleviate these symptoms.

People On The Autism Spectrum

People with ADHD aren't the only ones who benefit from weighted objects like vests or blankets. According to research, people with sensory processing issues can benefit greatly from the calming effects of deep pressure stimulation.

People With Anxiety And PTSD

Studies have shown that people using a weighted blanket for anxiety report significant reductions in clinical anxiety when compared to those who don’t.

Sleeping under a weighted blanket has even been shown to reduce the likelihood that someone with anxiety will suffer a panic attack because they wake feeling more refreshed and less anxious overall.

Due to the nature of the illness, people with Alzheimer's and dementia can often feel agitated or anxious throughout the day and have trouble falling back asleep. Weighted blankets can help lower their stress in the day and give them more restful sleep at night.

Should You Buy A Weighted Blanket?

Yes! Whether you're struggling with anxiety, ADHD, stress, or simply want to improve your sleep quality, there are plenty of studies that show that weighted blankets could be the solution you're looking for.