How to Take the Perfect Coffee Nap

Ah, the afternoon energy slump. The slog of hours after lunch and before dinner when all your energy and strength go to keeping your eyes open and your body moving. You reach for a cup of coffee, quickly followed by another…and then another. “Did some monster brew decaf coffee?” you wonder as you desperately wait for the boost of energy promised by guzzling caffeine.

If this sounds like you, then you may be a prime candidate for a coffee nap. Forget your regular cup o’ joe routine and try the latest trend brewing for coffee and sleep lovers alike: the nappuccino.

What is a Coffee Nap?

Peanut butter and jelly, Hall & Oates, coffee and naps? While the pairing of caffeine and sleepy-time may seem counterintuitive, indulging in a cup of coffee just before hitting the hay can actually leave you feeling more energized upon waking.

Science says this idea isn’t just a pipe dream but an actual chemical reaction. The culprit behind those afternoon energy slumps is called adenosine, which is a chemical compound found in the body that promotes sleep. At the peak of tiredness, adenosine circulates through the body in high amounts and only starts to decline once sleep begins.

How can a coffee nap help? When it comes to real estate in the brain, receptors are the equivalent of beachfront property, and caffeine competes with adenosine for the winning bid. While caffeine can’t actually decrease the level of adenosine in your body (only sleep can do that!), it can block the effects of adenosine by binding to your brain receptors instead — allowing you to wake feeling energized and refreshed versus tired and groggy.

But it’s important to remember that the coffee nap is truly a duet and not a solo. By drinking coffee and then taking a quick power nap, you are giving your body the best of both worlds. As you sleep, adenosine will naturally start to clear from your brain receptors, and essentially roll out the welcome mat for even more energy-inspiring caffeine to take its place. The result? A perfect harmony of energy and alertness that can only be accomplished by combining both caffeine and sleep.

Drink coffee, take nap, conquer the world. Sounds easy enough, but there are some tips and tricks to keep in mind before attempting your first coffee siesta.

When should I drink coffee before a coffee nap?

Time to start chugging! It takes caffeine from 20 to 25 minutes to reach its peak performance in your system, so you’ll want to finish taking your final sips just before heading to snooze. Also, you don’t want to brew a cup of coffee that you’re going to savor, because the key is drinking it quickly, and before it starts to take hold.

The goal is to wake up just as the caffeine starts to work its magic, so try to hold off on drinking your afternoon cup of coffee until you know you can dedicate time to napping afterward.

How much coffee do I drink for a coffee nap?

Good news! You don’t need to drink the entire pot in order for the nap to be successful. Try slurping down one to two 8-ounce cups (100 to 200 milligrams of caffeine) before entering the sweet world of slumber.

If you find hot coffee drinks a little difficult to chug, you’re not alone. Hot beverages in general are made to be sipped, so you may want to try iced coffee or cold brew instead of your standard drip or pour over. 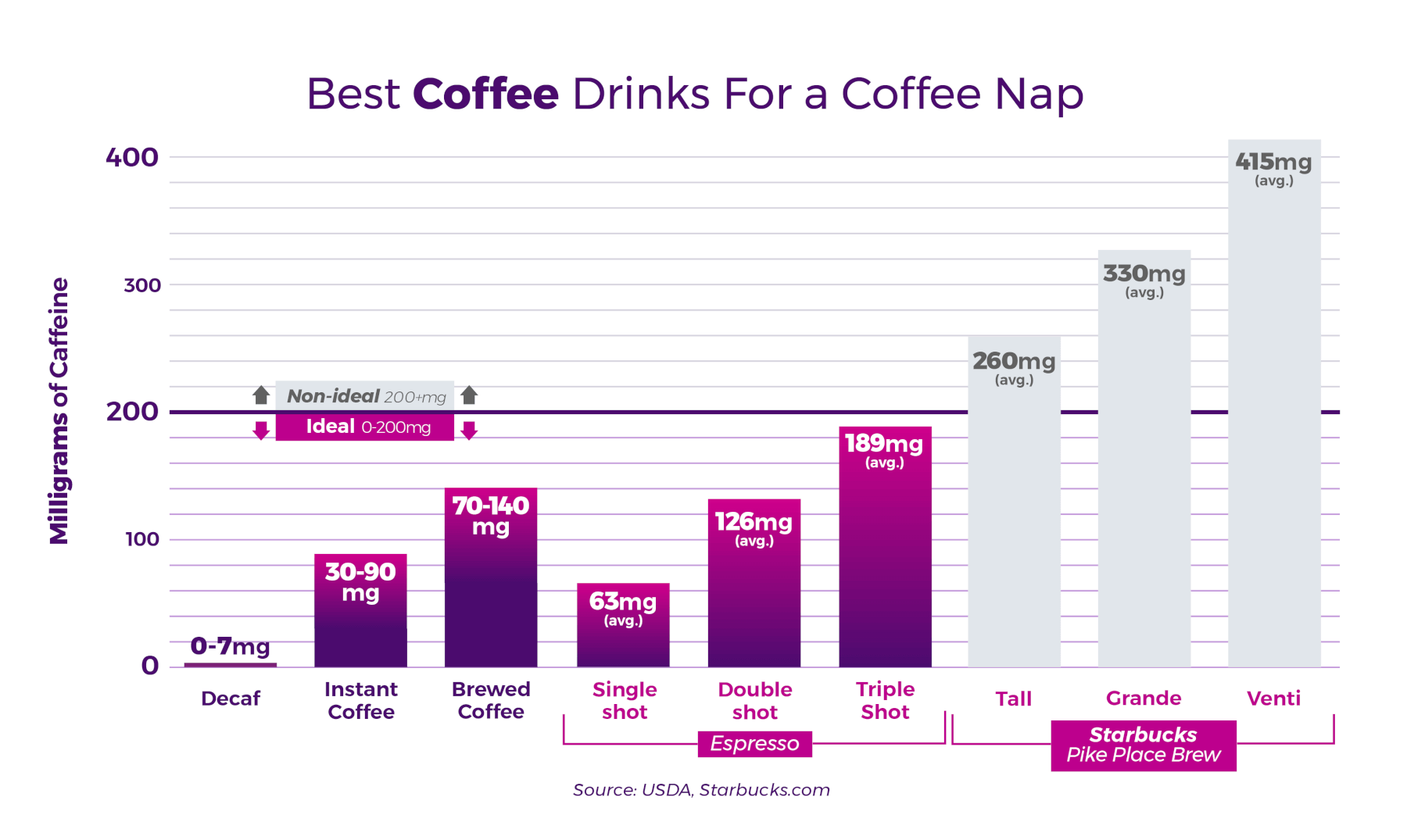 When should I wake up from a coffee nap?

When it comes to the perfect coffee nap, think of it as a sprint and not a marathon. You want enough snooze time to allow the adenosine in your body to decrease and give way to the caffeine benefits, but not so much time that you enter into a deeper stage of the sleep cycle.

Always aim for 10 to 20 minutes (ideally closer to 10) of uninterrupted nap time in order to reap the best rewards from your afternoon nappuccino. That’s typically the time period during which you hit your N1 (drifting off) and N2 (slowed breathing and heart rate) sleep states, which are both lighter stages of the sleep cycle and allow you to awake refreshed rather than lethargic.

If you let yourself get into the deeper sleep stages that occur after those first 30 minutes (which is usually when the N3 sleep stage begins), you’ll probably have trouble waking up and will feel just as groggy. That’s because of a phenomenon called “sleep inertia” or “sleep drunkenness.”

Sleep inertia makes for poor decision making, motor skills, and mood, and can last for 30 minutes after you wake up from your nap. It is exactly what you’re trying to avoid with your coffee nap. Plus, entering deeper sleep during the day can make it harder to fall asleep at night which can send you into a cycle of tiredness that’s hard to escape.

I hate coffee. Can I still take a coffee nap?

Yes! Caffeine does not discriminate when it comes to helping people get through a long day. If hot bean liquid isn’t your jam, there are plenty of other beverages, candies, and mints that serve up the recommended caffeine dose you need to take a truly energizing nap.

However, coffee is one of the healthier and faster ways to get your 200 milligrams of caffeine. Tea is great but usually doesn’t have as much caffeine as coffee. Soft drinks often have caffeine, but again not as much coffee, and they have other unhealthy chemicals and sugar. Energy drinks do have enough caffeine, but often have even more sugar than soft drinks.

Want more ideas for sleep-inducing beverages? Check out our picks for the best tea for sleep. 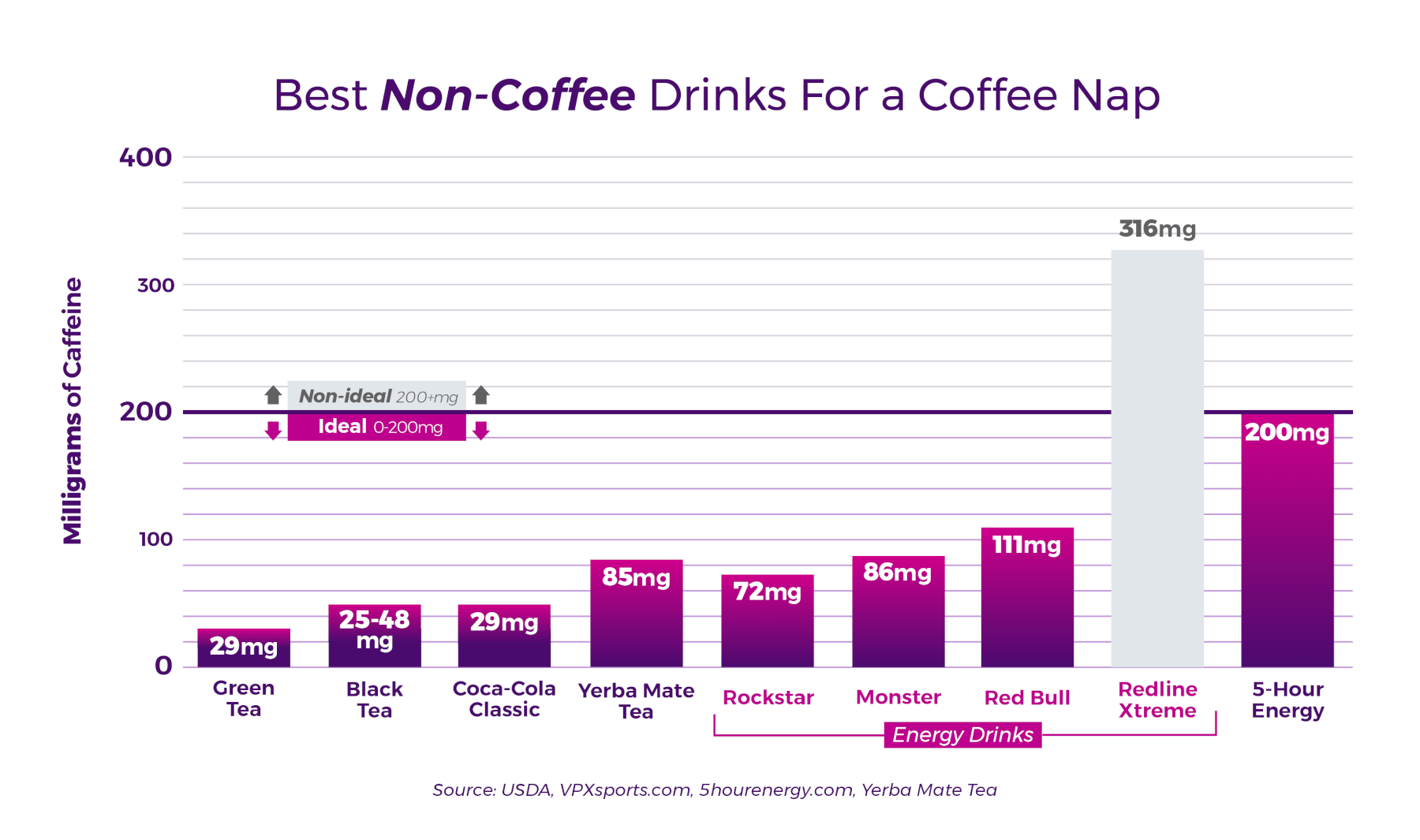 What if I can’t fall asleep?

Falling asleep isn’t a race, and sometimes it’s hard to fall asleep if you’re actively trying to do so — even if you’re exhausted! But that’s quite alright. Even gentle and tranquil rest can mirror the effects of a coffee nap. So don’t stress about conking out. Just lay back and enjoy a few minutes of peace.

Whether you are a nap newbie or a seasoned midday sleep professional, incorporating a couple cups of coffee into your nap routine can be an effective way to boost your energy levels. Bottoms up!